Nationally known bird artist and author Jonathan Alderfer, who has worked on many of National Geographic's birding books, joined for an hour of The Art of Science: Building a Field Guide. Mr. Alderfer discussed some of the process of putting together and updating the National Geographic field guide with additional reference to the new edition of Complete Birds of North America and he included a short time-lapse video of Jonathan painting an illustration of two male Harlequin Ducks from the NG field guide.

Every journey starts somewhere, and Lara’s started during a two-part Los Angeles Birders–Students Webinar by Jon Dunn on Calidris sandpipers in October 2020. As a result, she became intrigued with the fact that the local wintering large Dunlins (pacifica) of Southern California may well be the same species as the much smaller Dunlin (arctica) that breeds in northeast Greenland.
Lara took us on a circumpolar tour and described what she has learned about the ten subspecies of Dunlin, including their plumage, molt strategies and their breeding distribution.

Stacey Vigallon is Los Angeles Audubon’s Director of Environmental Education and serves as a project biologist for the organization’s California Least Tern and Western Snowy Plover monitoring programs. She is keenly interested in the nexus of conservation, community-based projects, and science communication. She has served as a LACMA teaching artist and an annual guest presenter at the UCLA Geffen School of Medicine Advanced Clinical Skills course. At Los Angeles Audubon, Stacey leads a range of student-centered programs, teaching science and science communication to K-12 students. She holds a BS in Wildlife Management from Humboldt State University, an MS in Wildlife Science from the University of Washington where she studied corvids in Dr. John Marzluff’s lab. She also completed the UC Santa Cruz Science Communication Graduate Program with an emphasis in Science Illustration. In addition to her full-time work with Los Angeles Audubon, she currently is an Education Doctoral Candidate at UCLA, focusing on transdisciplinary and nature-based learning.

Effective field biologists need strong skills in observation, communication, and collaboration. During this interactive presentation, participants (1) explored how drawing can help increase our observation skills, and (2) learned how biology and conservation careers can incorporate multiple disciplines.

Caching In: The Benefits of Spatial Learning and Memory in Mountain Chickadees

Ben Sonnenberg presented on Mountain Chickadees, who are known to hide food items for future recovery and consumption. This caching behavior, and the birds’ amazing ability to remember tens of thousands of cache locations, enables them to survive in the harsh winter months of the Sierra Nevada mountains. This dependence on food caches for winter survival makes chickadees a perfect subject to investigate spatial memory and the potential selective pressures driving the evolution of this cognitive ability. Using a unique Radio-frequency identification (RFID)-equipped feeder system, University of Nevada, Reno Chickadee Cognition lab is able to test spatial learning and memory in wild chickadees. Most recently, the lab has collected evidence that elevation-related climactic harshness is one of the selecting forces behind observed variation in memory in wild mountain chickadees.

Bob Gill is an emeritus research biologist with the U.S. Geological Survey’s Alaska Science Center, where he directed research on shorebirds for over four decades. His tenure in this position entailed long-term collaborative projects throughout the Pacific Basin, Russia, North and South America, and Europe. Bob received an MSc degree from the Avian Biology Laboratory at San Jose State University and is a graduate fellow at Groningen University, The Netherlands.
His work in Alaska began with an assessment of the breeding biology of several poorly known species (e.g., Bristle-thighed Curlew, Surfbird, Wandering Tattler, Rock Sandpiper, and Black Turnstone) and then moved into studies of movement ecology—particularly of extreme endurance migrants that cross the Pacific Ocean. The Bar-tailed Godwit is the exemplar of this, for which Bob and colleagues continue a multi-disciplinary quest to understand the evolution and adaptation of such migrations.

Marathon bird migration: Can you even relate?

Imagine you are a bird that nests in Alaska and spends the winter in New Zealand. Those two places are some 10,800 km (7,000 miles) apart, or the equivalent of three flights between San Francisco and New York. Now there are several ways and means of getting to New Zealand from Alaska, but imagine doing it by flying nonstop for 10 days without eating, drinking, or sleeping. Keep imagining—but you can’t relate, can you?
This talk featured the Bar-tailed Godwit, through which we explored adaptations used by a host of mostly shorebird species in their annual marathon flights across the Pacific Ocean. In doing so we touched on a history of the concept, looked at the geography and oceanography of the Pacific Basin, explored the physiology of endurance migration, assessed the birds’ cognition of time and space, talked about their abilities to orient and navigate—especially through a complex atmosphere—speculated on how these extreme migrations evolved, and, finally, we looked at the prospects for these migrations to be sustained in the future. 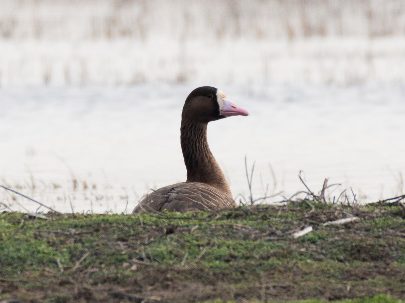 The Tule Goose has long been a bird of mystery with their breeding and wintering grounds poorly known. Most folks weren't even sure what it was until Delacour and Ripley formerly named it in 1975. We now know they breed in between Cook Inlet and the Alaska Range in southern Alaska. They primarily winter in the western Sacramento Valley, best found at Colusa National Wildlife Refuge.
Greater White-fronted Goose (Tule Goose) Anser albifrons elgasi is a physically distinct subspecies from the smaller sponsa subspecies. With its deeper, lower calls and different feeding ecology, they should perhaps be considered a distinct species.
Their talk focused on their distribution, feeding ecology, and identification of this distinctive goose.
Photo by Alex Cho.

Phil Unitt is the curator of Department of Birds and Mammals at the San Diego Natural History Museum. Phil was the Project Manager and Author for the San Diego County Bird Atlas. The bird atlas describes the breeding status of each species recorded within San Diego County from March 1997 to February 2002. The Atlas was amassed from a large collection of records collected by birders, who are often volunteers. The San Diego Bird Atlas also covers all the species recorded up through 2003 in San Diego County, its winter visitors, migrants and strays.
Phil gave us a great overview of the bird abundance and distributional changes of species throughout San Diego County.  Phil also increased our understanding of ways the Atlas data can be used to understand the ecology of a region and to monitor species of concern. It was a fun and an enlightening evening.

WFO Student Birder Lara Tseng, age 13, told us about her research monitoring nest boxes and calcium consumption during the nesting season. Lara collects valuable nesting data on each nest box, including the reproductive success of the birds.
Like most birds, the Western Bluebird population depends in part on the weather, predators, and the availability of food. It is also directly affected by the availability of and competition for nesting sites. Installation of nest boxes has helped increase Western Bluebird populations. Bluebird nest box monitoring is not an easy project, but when done correctly, it can benefit birds and can be an incredible learning experience.
Thank you Lara for telling us the results of your Western Bluebird research project. It was a fun and educational time!
Go to the presentation video.

Bird Conservancy of the Rockies

Meredith McBurney, and banding station volunteer and WFO Student Member, Santiago Tabares spoke to WFO students about bird banding and its role in ornithology and bird conservation.
Meredith and Santi presented what happens at a bird banding station, what data are collected, and how it is used. Recent advances in science and technology are allowing scientists to use bird “banding” and remote sensing to expand what we can learn about birds.
Go to the presentation video.

Listen to her Sing!

Only male birds sing, right? Wrong! In fact, this widespread notion has a lot more to do with human cultural and geographic biases than it has to do with nature.
Nathan Pieplow, author of the renowned and invaluable The Peterson Field Guide to Bird Sounds, told us about the often-overlooked songs of female birds.

Red Crossbills are finches with beaks that cross at the tips. In North America they have been classified into eleven types based on their flight calls and one, the Cassia crossbill, has been split into a different species. Evening Grosbeaks are finches with large beaks that have been classified into five populations based on their flight calls and geographic distributions.
Lance spoke about the biology and adaptations of Red Crossbills and Evening Grosbeaks and provided recordings and sonograms to demonstrate how to identify their flight calls.

How do Birds Molt their Feathers, and Why Does it Matter?

Feathers are a key innovation for birds because they provide many different functions. Feather replacement strategies must balance the immediate needs for feathers with loss of function during molt.
Ryan discussed his research on the evolutionary patterns and exogenous drivers of the diversity of molt strategies in birds.

With a wingspan of nearly 10 feet and weighing up to 25 pounds, the California Condor is the largest land bird in North America. Condors once ranged from California to Florida and Western Canada to Mexico. However, their populations declined dramatically in the mid-20th century, largely due to lead ammunition.
Teodelina told the story of their amazing recovery driven by efforts from the US Fish and Wildlife Society’s California Condor Recovery Program.

WFO Students shared their best bird photography, sketches, art and field notebooks with each other. (Photos by Alex, Aaron, and Calvin; illustrations by Lily and Polly.)