WFO is fortunate to have members who give tirelessly of their time and talent. In order to recognize individuals and organizations for their volunteer service and contributions to the organization, we present special awards on a periodic basis to honor these individuals.
Jean D. Brandt (2010)

Jean has served as WFO’s Recording Secretary for the past six years, keeping the minutes of our board meetings and furnishing us with a well-organized chronicle of our board’s deliberations and our organization’s activities. 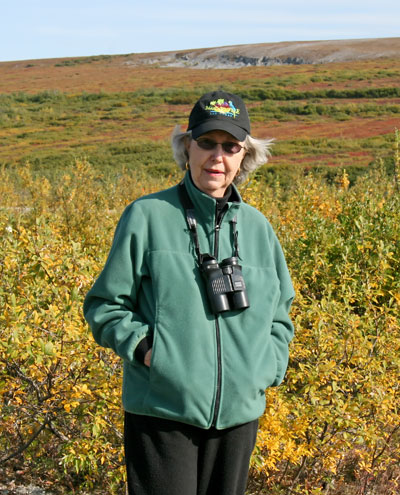 However, many of you may know Jean as the inconceivably organized superwoman who has long managed at 0-dark-thirty a.m. to organize the departures for the morning field trips at WFO conferences. Jean took it upon herself to do this, waking up before the rest of us, seeing to it that the trips departed on time, and rarely getting to go on a field trip herself.

The rest of each year, Jean has long kept busy promoting birding, ornithology, and conservation through the Los Angeles Audubon Society, the Los Angeles Zoo, the Natural History Museum of Los Angeles County, and other organizations. A prominent figure with Los Angeles Audubon since the 1970s, Jean served both as President of the chapter and as Editor of The Western Tanager. She led innumerable field trips, hosted meetings, and for many years served as the voice of L.A. Audubon’s weekly telephone tape of bird sightings.

One of Jean’s key contribution to field ornithology was her vital role in ensuring the publication of Kimball Garrett’s and Jon Dunn’s 1981 book, Birds of Southern California: Status and Distribution. Jean personally saw to it that L.A. Audubon published this volume, and she worked hard to help with aspects of its production. Garrett and Dunn each note that the book is dedicated to her for this reason.

Jean has traveled the globe to study birds and other aspects of the natural world, while also honing an intimate knowledge of the avifauna of the Los Angeles region. A long-time co-compiler of the Malibu Christmas Bird Count, she has made the Sepulveda Basin in Encino her local “patch,” while making her yard a haven for wildlife.

Supremely organized and determined to work efficiently and accurately, Jean put her skills into action with film distribution for a major studio, and then as coordinator of the Natural History Museum of Los Angeles County's Gem and Mineral Council. She retired from that position in 2010.

Western Field Ornithologists is proud to honor and to thank Jean for her many years of dedicated volunteer effort on behalf of WFO and field ornithology in the west. 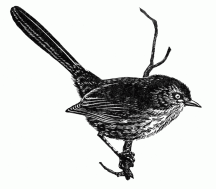 Serving the West San Gabriel Valley, Pasadena Audubon Society (founded 1904) is the oldest Audubon Chapter in California. Over 106 years old, the Chapter’s commitment to youth goes back over ninety years when, in 1918, they became concerned that boys were having their attention diverted to Europe and the trenches of WWI and set up a program to further direct the attention of young people to nature. 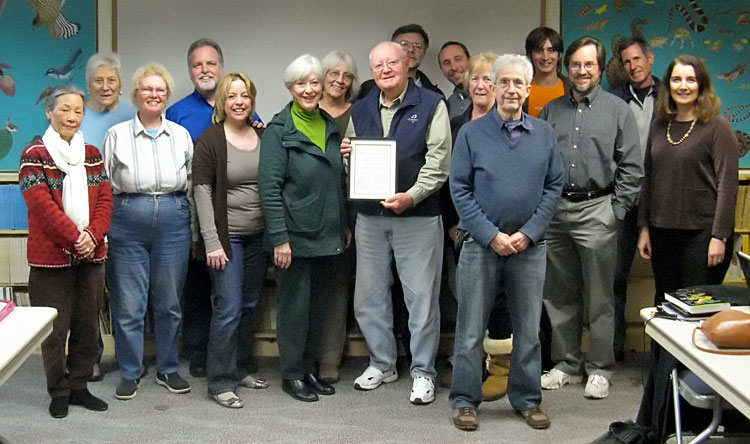 For their many years of dedicated volunteer effort on behalf of Western Field Ornithologists, and field ornithology in the west.

Larry Allen of Los Angeles, California and Bob Evans of Benson, Arizona have been long-standing members of Western Field Ornithologists (each has been a member for over 20 years). Both men have been consistent annual WFO volunteers; sharing their time in working to make our annual conferences successful events and offering to do any job that needs doing. From stuffing registration envelopes to leading field trips and everything in between, these men have allowed themselves to be recruited year after year to fill in and work on any part of our conference that needed an extra set of hands. Lucky for us, apparently their vocabularies do not include the word "no" and we deeply appreciate their spirit in sharing their time and energy with us.

For their many years of dedicated volunteer effort on behalf of Western Field Ornithologists, and field ornithology in the west.

Lena Hayashi of Huntington Beach, California and Heath Wakelee of Rocklin, California have been members of Western Field Ornithologists for many years and both are always ready to help out the organization in any ways they can. Lena has been central to making our recent special field trips to the South-central Sierra (2011) and Northeast California (2013) successful, handling ALL the logistics, travel, meals, and overall organization for each. Heath, a Red Cross Certified Wilderness First Aid instructor, has twice given workshops on wilderness first aid at WFO conferences, always refusing to accept any honoraria or compensation. Several years ago, Heath observed some of our issues with organizing field trip departures each morning and he designed and built the field trip sign holders we have used for the past 5 years. Every year when we see Lena or Heath at our annual conferences we can be certain their first words will be, "What can I do to help?"

WFO recognizes KATHY MOLINA with our WFO Volunteer Award, for her many years of volunteer effort on behalf of Western Field Ornithologists and field ornithology in the west 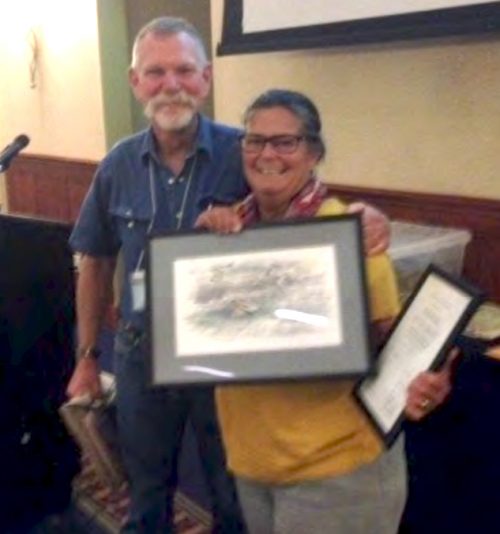 A member of WFO for many years, Kathy Molina, of Tujunga, California, became an Associate Editor of Western Birds in 1999 and as such helped to conduct crucial review and editorial duties from then through 2012.  In late 2004 she agreed to become, in addition, the first Assistant Editor of Western Birds, a position created to take some time-consuming tasks off the desk of the Editor and a post she held until stepping down in late 2012.  As the Assistant Editor during those eight years, Kathy evaluated some 180 manuscripts for possible publication in Western Birds.  She distributed those submissions among the other Associate Editors for review and editorial suggestions (taking on those tasks for many submissions herself), following the collation of which the improved articles moved on to the Editor’s desk, whence they ultimately became the published Articles and Notes that constituted the foundation of Western Birds during those years.

Service Awards were presented to Nathan Pieplow at the Annual Meeting of Western Field Ornithologists, Billings, Montana, June 13, 2015, and to Peter LaTourrette shortly after the meeting. 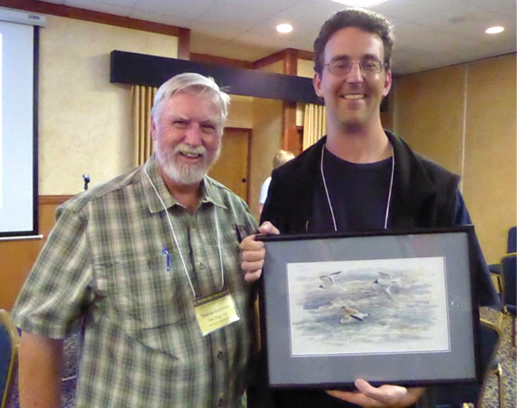 For their many years of volunteer effort on behalf of Western Field Ornithologists and field ornithology in the west.

Nathan Pieplow of Boulder, Colorado has conducted bird sound identification panels at every WFO conference since the 2006 conference in Boulder, Colorado. These sessions have always been very popular, especially since Nathan adopted the format of a pub style contest among self-chosen teams a few years ago. Nathan conducted his first bird sound-related workshop at our 2009 conference in Boise, Idaho and has offered similar workshops at most conferences since then. Recent workshops have been based on material that will appear in Nathan’s forthcoming two-volume Peterson Field Guide to Bird Sounds.

Peter LaTourrette of Los Altos, California became Photo Editor of Western Birds in 1992. For more than 20 years Peter has chosen WB’s cover photos and processed all the photos that have appeared in our journal. Peter also prepared all the color photographs that appear in Rare Birds of California, published by WFO in 2007. Because Peter was unable to attend our conference in Billings, President Dave Quady met with him and his wife in the San Francisco Bay area, on July 15, 2015 to honor Peter with WFO’s Volunteer Award.

In 2015 Western Field Ornithologists’ Board of Directors honored two other individuals with special certificates: Pierre Devillers and Jean Terschuren. Like Alan Craig, Ginger Johnson, and Guy McCaskie, Pierre and Jean were also founders of the organization and co-editors of California Birds during its first two years of publication, and each contributed significant papers to the journal during that period. 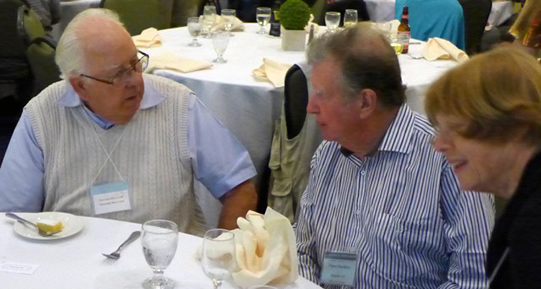 Pierre’s and Jean’s active involvement in Western Field Ornithologists ended during the organization’s early years, when they moved to Belgium, Pierre’s home country. Happily, both of them attended our annual conference in San Diego in 2014, where they were able to share in celebrating WFO’s founding, and its history. The Board created and sent special commemorative certificates to Pierre and Jean in August 2015.

For his many years of volunteer effort on behalf of Western Field Ornithologists and field ornithology in the west. 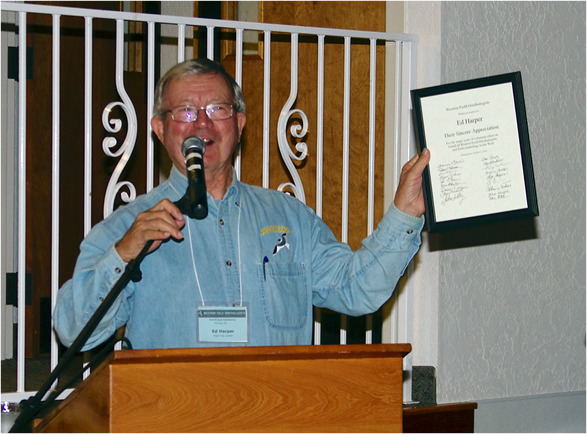 Ed Harper of Sacramento, California has conducted bird photo identification panels at every WFO conference since the 2008 conference in San Mateo, California. These sessions have always been instructive and very popular. Each year Ed has assembled a distinguished panel of birders to identify the birds his photographs depict. Correctly identifying the species is the goal, but more valuable and instructive than that is learning the field marks that point toward that identification and eliminate other candidate species. More often than not, one or more of the panelists adds comments about molt, phenology, migratory behavior, or other matters that further elaborate their identification process.

In addition to this ongoing service to WFO, Ed planned and led WFO’s very successful 2015 conference in Billings, Montana – our first conference ever in that state.