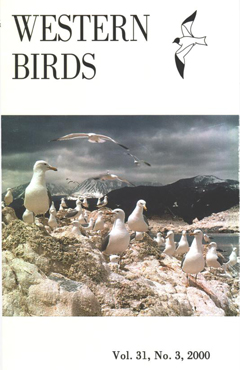 ABSTRACT: A survey of Isla San Martin on 2 June 1999 revealed about 30 Brown Pelican, 600 Double-crested Cormorant, and over 300 occupied Western Gull nests, plus a mixed pair of oystercatchers. Thus the Double-crested Cormorant has reoccupied what was once its largest colony in North America. Surveys of Islas Todos Santos on 3 June 1999 and 27 March 2000 revealed 115 Double-crested Cormorant and at least 184 occupied Brandt’s Cormorant nests, plus about 1400 nesting pairs of Western Gulls. On Todos Santos, at least two nests of the Pelagic Cormorant represent a southward extension of that species’ breeding range, whereas two nesting pairs of the Reddish Egret represent a northward extension.