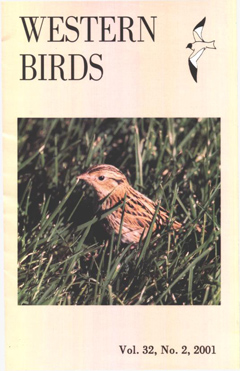 ABSTRACT: We report information on 100 species from the Grand Canyon region from 1974 to 2000; of these, 98 are from the Colorado River and 18 species are new to the Grand Canyon region. We compiled new seasonal information on 33 species and breeding information on 11 species. Changes are due, among other factors, to a change in habitats resulting from the construction and operation of Glen Canyon Dam. Flow regulation from the dam increased water clarity, and numbers of many waterbirds (primarily Anseriformes) subsequently increased. For example, the Common Goldeneye did not occur in Grand Canyon before the late 1980s, but since then it has become the most abundant wintering waterfowl. Stabilization of the river’s flow has also allowed the growth and expansion of riparian vegetation. Birds we believe are responding to this increase in vegetation include Bell’s Vireo, Sharp-shinned Hawk, and wintering Empidonax flycatchers and sparrows. Also, there has been an increase in coverage, e.g., bird-monitoring river trips in winter. Some species are increasing in number and/or expanding their ranges in Arizona, such as the Double-crested Cormorant, Cattle Egret, Ross’s Goose, White-winged Dove, Anna’s Hummingbird, Black Phoebe, Brown-crested Flycatcher, Crissal Thrasher, Summer Tanager, and Common Grackle. Last, improved field identification has helped in discerning closely related species.