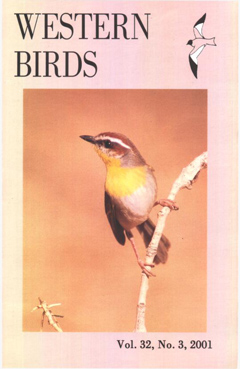 Distribution and Abundance of Winter Shorebirds on Tomales Bay, California

ABSTRACT: I analyzed the distribution and abundance of wintering shorebirds (Scolopacidae, Charadriidae, and Recurvirostridae) in Tomales Bay, California, on the basis of 57 baywide counts conducted over 10 years, from 1989-90 to 1998-99. Tomales Bay supports up to 20,689 shorebirds in early winter, thus qualifying as a wetland of “regional” importance in the Western Hemisphere Shorebird Reserve Network. Minimum overall shorebird abundance fell as low as 1291 in late winter. Tomales Bay supported approximately a third of the wintering shorebirds in the Point Reyes/Bodega area in early winter. Observations of tidally structured flock movements of several species suggested that the northern and southern ends of Tomales Bay are occupied by different wintering groups. In association with cumulative seasonal rainfall, most species declined in abundance significantly in midwinter. The Sanderling and Marbled Godwit increased with cumulative rainfall in the north and south bay, respectively, suggesting weather-related influxes from outer coastal beaches. After accounting for the effects of cumulative seasonal rainfall and a 10-year trend in annual rainfall, I detected no trends in species’ abundances. Foraging and roosting shorebirds at the northern end of the bay were vulnerable to direct disturbance from concentrated recreational use. Long water-residence times in southern Tomales Bay suggest that shorebirds there may be particularly vulnerable to toxic spills or anthropogenic eutrophication. The closeness of San Francisco Bay implies a high potential for invasion of nonnative organisms established there, which could alter the availability of benthic prey to shorebirds in Tomales Bay. Shorebird feeding habitat at the deltas of Walker and Lagunitas creeks may be adversely affected by heavy rainfall leading to the deposition of sediment. Daily influxes of roosting gulls from a local landfill were associated with reduced shorebird use of tide flats. Shorebirds' use of open tide flats developed for mariculture is reduced, although floating oyster bags provide roosting areas during high tides. Breaching levees that isolate historic wetlands may increase shorebird use in some areas. The likelihood of regular or episodic intraseasonal movements among Point Reyes/Bodega area wetlands suggests Tomales Bay and other nearby wetlands are worthy of broad protection.

Download—Distribution and Abundance of Winter Shorebirds on Tomales Bay, California