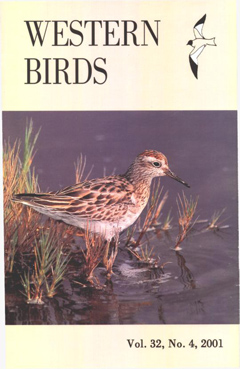 Breeding Status of the Black Tern in California

ABSTRACT: We surveyed breeding Black Terns throughout California in 1997 and 1998, following winters of very high runoff. We estimated the state's nesting population at about 4150 pairs (±30%), of which 47% were in northeastern California and 53% in the Central Valley. The 1940 pairs in northeastern California were at 60 sites; 59% were at 10 sites and 70% were in Modoc County. State and federal wildlife refuges supported <4% of the regional population; the rest were mostly on U.S. Forest Service and private lands. Low emergents, primarily spikerush (Eleocharis spp.) and Juncus spp., dominated most nesting marshes in northeastern California. Percent cover of emergents (vs. open water) was >80% at 68% of breeding sites. About 90% of the Central Valley breeding population was in Sacramento Valley rice fields. The rest were in the San Joaquin Valley, primarily in flooded agricultural fields with residual crops or weeds and secondarily in rice fields. State, federal, or private refuges or reserves held <1% of Central Valley terns.

Currently the Black Tern is extirpated locally at Lake Tahoe and in the Sacramento-San Joaquin River Delta. In the San Joaquin Valley, formerly a center of abundance, terns typically now breed mainly in two small areas of rice fields in the San Joaquin Basin. The Black Tern is quasi-extirpated in the Tulare Basin, where it nests irregularly and locally in ephemeral habitats, mainly in extremely wet years. The 160,000 to 200,000 ha of rice currently planted annually in the Sacramento Valley may far exceed the average amount of natural shallow-water habitat available there before agriculture.

We recommend a statewide survey of the California breeding population about once every 10 years, during typical climatic and habitat conditions, and monitoring for population trends annually. Conservation should focus on restoring, enhancing, and providing long-term protection for suitable wetlands and on maintaining isolation of colonies from humans and ground predators. Given the scarcity of water in the Central Valley in most summers, efforts to enhance tern habitat may be most fruitful in years of exceptional runoff. Research is needed on nesting and foraging ecology, habitat suitability, demography, limiting factors, population response to changing water conditions, and the value of rice fields versus wetlands as breeding habitat.

Download—Breeding Status of the Black Tern in California