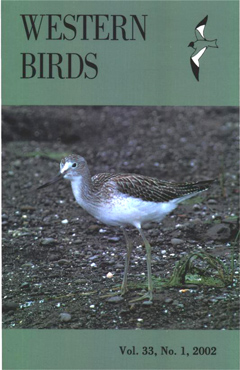 ABSTRACT: Using mist netting and area-search censuses, we monitored fall landbird migration in remnant riparian habitat along the Sacramento, San Joaquin, and Cosumnes rivers from 1995 to 1999. We detected 125 species, 73 of which we captured in mist nets. Six species of passerines were captured in mist nets but not detected on area searches; 22 passerines were detected on area searches but not captured in mist nets. Age ratios in each region ranged from two to four young for every adult captured. In the Central Valley the ratio of young to adults is lower for most species than along the coast of central California, implying that the valley is more important as a migration route than the coast. At 74.6 birds per 100 net hours capture rates were approximately twice as high along the Cosumnes River than in the other two regions, the Sacramento and San Joaquin rivers. The capture rate of neotropical migrants was highest along the Sacramento River, where 18 species were caught. Capture rates along the Cosumnes River were highest for resident species and along the San Joaquin River for wintering species. The use of these remnant riparian sites by numerous species, many of current conservation interest in California, suggests the importance of this habitat to landbirds in the West during the autumn.