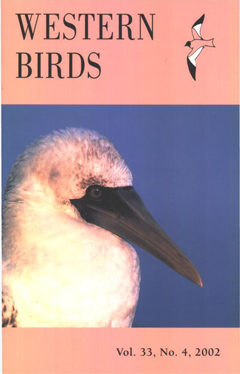 Abundance and Distribution of Migratory Shorebirds at Mono Lake, California

Emilie A. Strauss, Christine A. Ribic and David Shuford

ABSTRACT: We counted migratory shorebirds and documented their patterns of shoreline distribution at Mono Lake in the Great Basin of California via annual spring and fall surveys from 1989 to 1995. We tallied a total of 30 species, 29 in fall, 25 in spring, and 24 in both seasons. Median counts of all shorebirds were 31,432 (13,901–50,916) in fall and 7792 (2683–25,616) in spring. Median counts exceeded5000 each for the American Avocet and Wilson’s and Red-necked phalaropes in fall and 1000 for the Western and Least sandpipers in spring. Of nine species with median counts of >50 individuals, medians were >50% higher in fall than spring for the American Avocet, Wilson’s Phalarope, and Red-necked Phalarope, were >50%higher in spring than fall for the Semipalmated Plover, Western Sandpiper, Least Sandpiper, and Dunlin, and similar in both seasons for the Snowy Plover and Killdeer.The distribution around the lake of total shorebirds and of most individual taxa, except for the Spotted Sandpiper in fall, varied considerably from year to year. Shorebirds as a group as well as most species considered separately concentrated on the south, east, or north shores; except for the Killdeer and Spotted Sandpiper all taxa appeared to avoid the west shore at both seasons. Mono Lake is one of the most important sites for shorebirds in the Intermountain West, particularly for Wilson’s and Red-necked phalaropes. Mono Lake’s large size, varied habitats, and abundant food are very attractive to shorebirds; habitat availability and food supply are more reliable there than at many sites where they fluctuate widely with variations in climate. A water-rights decision that raises the lake’s level likely will improve shorebird habitat, though effects will be mixed.

Download—Abundance and Distribution of Migratory Shorebirds at Mono Lake, California