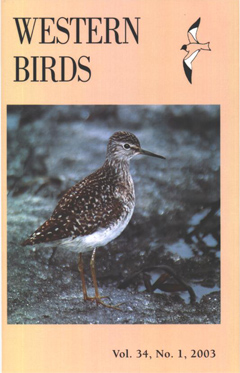 ABSTRACT: In light of recent and proposed restoration projects that will affect bird numbers in San Francisco Bay, California, we assessed the status of breeding populations of the Black-necked Stilt (Himantopus mexicanus) and American Avocet (Recurvirostra americana) in South San Francisco Bay in May 2001. We counted 1184 stilts and 2765 avocets. Considering only birds observed exhibiting breeding behaviors, our low estimates of breeding birds in the south bay were 270 stilts and 880 avocets, but the true numbers are probably closer to the number of stilts and avocets we actually counted. Our estimates of the breeding population fall within the range of similar estimates from the south bay 20–30 years ago. We know of no other sites on the Pacific coast of the United States with breeding populations of stilts and avocets whose sizes approach those of the South San Francisco Bay. The greatest numbers of stilts and avocets bred on salt ponds in the south bay; lesser numbers bred in a combination of fresh and salt marshes. The observed use by stilts and avocets of available habitat differed significantly from expected use. Stilts used tidal marshes and salt ponds approximately in order of availability, whereas avocets made greater use of salt ponds. Within marshes, stilts most often used vegetated areas followed by mudflat/open water habitat, whereas for avocets the pattern was reversed. Within salt ponds, both species were most often observed on islands, but their order of use of other microhabitats in salt ponds differed. We observed little use of tidal flats by breeding stilts and avocets.