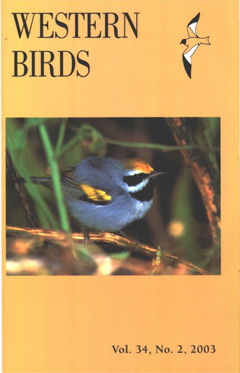 The Occurrence and Seasonal Distribution of Migratory Birds on Southeast Farallon Island, 1968–1999

ABSTRACT: Daily monitoring of migrating birds at Southeast Farallon Island, initiated in 1968, has continued uninterrupted. The number of species recorded on this 44-hectare island reached 403 in 2002. Ten species of waterbird, in descending order of abundance, the Sooty Shearwater, Brown Pelican, Red and Red-necked Phalaropes, Pacific Loon, Buller’s Shearwater, Bonaparte’s Gull, Black-legged Kittiwake, and Heerman’s and Glaucous-winged Gulls, averaged over 500 individuals recorded annually. Nine species of landbird, in descending order of abundance, the European Starling, White-crowned and Golden-crowned Sparrows, Yellow-rumped Warbler, Savannah Sparrow, Dark-eyed Junco, Ruby-crowned Kinglet, Wilson’s Warbler, and American Pipit, averaged over 125 individuals annually. Since migrants on the island were last summarized through 1989, one notable change has been an increase in skuas, jaegers, Arctic and Elegant Terns, and Sabine’s Gulls, perhaps reflecting an increase in Pacific Sardines in surrounding waters. Increases in the Brown Booby and Black-vented Shearwater may also be evidence of warmer late summer and fall water temperatures in the past 10 years. On the other hand, the occurrence of most species of ducks decreased dramatically during the 1990s, perhaps reflecting decreased population sizes and/or an increased wintering population of Peregrine Falcons at the Farallones. Preliminary analyses suggest that, over the 32-year monitoring period, mean spring arrival dates for many species of landbirds have become earlier and mean fall arrival dates have become later. Of species averaging at least 10 records per season, 10 of 11 species in spring and 28 of 38 species in fall showed this patterns when data from 1968–1989 are compared with those from 1968–1999.