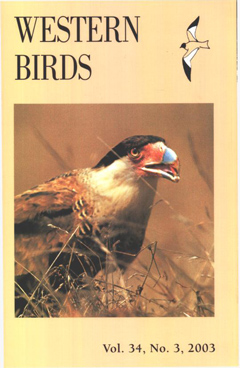 Specimen Record of a Long-billed Murrelet from Eastern Washington, with Notes on Plumage and Morphometric Differences between Long-billed and Marbled Murrelets

ABSTRACT: On 14 August 2001, Robert Dice found a Brachyramphus murrelet approximately 12 miles east of Pomeroy in eastern Washington state more than 200 miles from the nearest marine waters. The bird died later that day. It had begun definitive prebasic body molt, but not flight feather molt. Necropsy indicated that the bird was a female, probably in her second calendar year. Johnson and Thompson identified the bird as a Long-billed Murrelet, Brachyramphus perdix, on the basis of plumage and measurements; it is the first specimen of this species for Washington state. Contrary to many recent publications stating that Long-billed and Marbled Murrelets have white and brown under wing coverts, respectively, we confirmed that both species typically have white under wing coverts prior to definitive prebasic molt and brown under wing coverts after this molt. Absence of any extensive storm systems in the North Pacific in the days preceding 14 August suggest that the specimen discussed here became disoriented during postbreeding migration rather than having been blown inland by easterly winds.

Download—Specimen Record of a Long-billed Murrelet from Eastern Washington