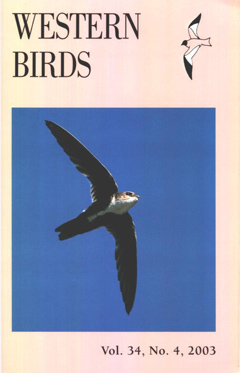 Daniel A. Airola and Jesse Grantham

ABSTRACT: The Purple Martin (Progne subis) has been eliminated from most of California’s Central Valley. The last known population nests in elevated roadways (“bridges”) in the city of Sacramento. We reviewed bird records (1949–1990), conducted surveys to assess population size and trend (1991–2002), and evaluated management actions to protect and increase populations. Martins ceased nesting in buildings in Sacramento in the 1960s and 1970s as the European Starling (Sturnus vulgaris) population exploded, but adoption of vertical weep holes for nesting beneath bridges in the 1960s has allowed martins to persist. The known Sacramento population increased from four to seven colonies and from approximately 105 to 135 nesting pairs from 1992 to 2002. Martin colonies are located in longer (>85 m) bridge sections that provide at least 6 m of unobstructed airspace beneath the colonies. Management has included a pilot project to insert wire “nest guards” in weep holes to increase survival of young and protecting nesting colonies during construction activities near nests. Initial results indicate that nest guards reduce mortality of young falling from nests and do not result in increased competition for nest sites by starlings and other species. Exclusion of martins from nesting at a large colony to prevent disturbance from a construction project reduced nesting use of the site; such exclusion is not considered necessary to protect nesting birds. Martin recovery may require substantial management, including protecting and enhancing existing colonies, encouraging colonization of other elevated road sites, establishing martin use of artificial nest structures in unoccupied regions, and enlisting public adoption of management responsibility.