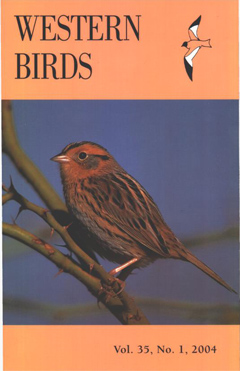 ABSTRACT: The California Bird Records Committee reached decisions on 188 records involving 79 species and one species pair reported in 2002, endorsing 139 of them. New to California was the Eurasian Collared-Dove (Streptopelia decaocto). Adjusted for this addition, California’s bird list stands at 620 species, ten of which, including this addition, are non-native. Potential first state records of the Pink-backed Pelican (Pelecanus rufescens) and Demoseille Crane (Anthropoides virgo) were not accepted on grounds of questionable natural occurrence, and a potential state first Yellow-breasted Bunting (Emberiza elegans) was not accepted on grounds of identification. Other significant records reported here include the return of California’s first Common Greenshank (Tringa nebularia), the state’s second Little Bunting (Emberiza pusilla), third Arctic Warbler (Phylloscopus borealis), and fourth Glossy Ibis (Plegadis falcinellus). In addition to discussing the decisions of the Committee on 2002 records, this report discusses trends in documentation of birds submitted to the Committee.