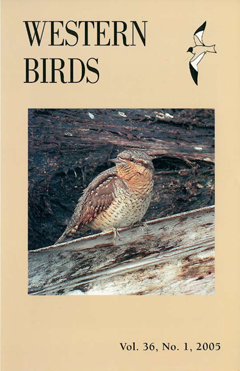 ABSTRACT: Gambell, St. Lawrence Island, Alaska, is located in the northern Bering Sea. Birders and ornithologists have visited Gambell, primarily during the late spring, for many decades. Regular coverage in fall, however—primarily between late August and early October—commenced only in the early 1990s and has continued through the present, making this site one of the most studied in western Alaska during the autumn season. Between 1992 and 2004, I spent a total of 251 days at Gambell between mid-August and early October, studying the birdlife. Many additional autumn avian records from there and elsewhere on St. Lawrence Island date back to the 1930s and earlier. Through 2004, 174 species had been documented at Gambell during the period August−November. Besides many species of western Alaska, this avifauna combines a seabird spectacle rivaled by few places in the world, the regular passage of many migrant shorebirds and “trans-Beringian” passerines, and numerous vagrants from both Asia and the North American mainland. The most intensive autumn coverage began only in 1999, but since then this site has hosted four first North American records—plus additional second and third sightings—as well as records of a number of North American species previously unrecorded in the Bering Sea region.