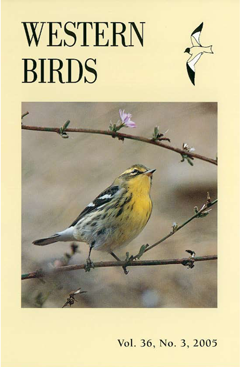 The Birds of San Clemente Island

ABSTRACT: From 1992 to 2004, we observed birds on San Clemente Island, as part of our work toward the recovery of the island’s endangered species. We increased the island’s bird list to 317 species, by recording many additional vagrants and seabirds. The list includes 20 regular extant breeding species, 6 species extirpated as breeders, 5 nonnative introduced species, and 9 sporadic or newly colonizing breeding species. For decades San Clemente Island had been ravaged by overgrazing, especially by goats, which were removed completely in 1993. Since then, the island’s vegetation has begun recovering, and the island’s avifauna will likely change again as a result. We document here the status of that avifauna during this transitional period of regrowth, between the island’s being largely denuded of vegetation and a more natural state. It is still too early to evaluate the effects of the vegetation’s still partial recovery on birds, but the beginnings of recovery may have enabled the recent colonization of small numbers of Grasshopper Sparrows and Lazuli Buntings. Sponsored by the
U. S. Navy, efforts to restore the island’s endangered species continue—among birds these are the Loggerhead Shrike and Sage Sparrow.