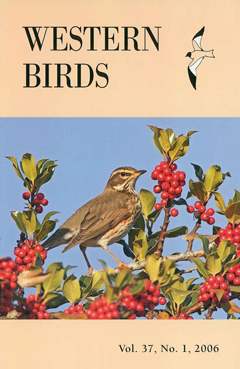 Shorebird Use of the Lower Los Angeles River Channel: A Novel Wetland Habitat

ABSTRACT: The concrete-lined channel of the lower Los Angeles River in Long Beach supports one of the largest concentrations of shorebirds in southern California during fall migration. Each fall, the Black-necked Stilt (Himantopus mexicanus), Western Sandpiper (Calidris mauri), and Least Sandpiper (Calidris minutilla) occur in the thousands of individuals per day, and the American Avocet (Recurvirostra americana) and Long-billed Dowitcher (Limnodromus scolopaceus) occur in the hundreds. Numbers peak from mid-August through late September, and eight systematic surveys between 9 August and 27 September 2000 yielded in excess of 14,000 birds on four of these counts. Despite the channel’s proximity to the coast, the species composition resembles that at other inland sites in the Southwest more closely than natural coastal wetlands in the region. Because of the channel’s constricted concrete borders, even slight rainfall can raise the water level in the channel, reducing the suitability of the habitat for shorebirds. This effect likely accounts for the area’s relatively light use by shorebirds outside the late summer and fall dry season.

Download—Shorebird Use of the Lower Los Angeles River Channel: A Novel Wetland Habitat