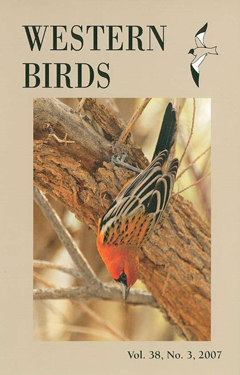 ABSTRACT: During the 20th century the Eastern Bluebird (Sialia sialis) expanded its range westward, mainly as a result of anthropogenic alteration of habitats. Along the Rio Grande in New Mexico the species’ numbers in winter have recently increased spectacularly, and from 1999 through 2004 four records of breeding were published. Here we report 30 further nestings in just 2005 and 2006. In all 30 cases, the birds nested in the cottonwood riparian forest along the river following fire, postfire habitat rehabilitation, or fuel reduction work, all leading to partial or complete removal of the understory vegetation. The Eastern Bluebirds’ observed nesting season lasted from late March through the end of July. Most (17) nesting was in nest boxes, with an observed mean productivity of 1.43 fledglings per nest attempt in 2005 (n = 7) and 2.1 fledglings per nest attempt in 2006 (n = 10).