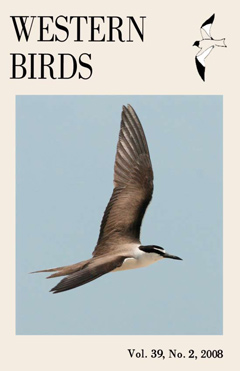 ABSTRACT: Three records of the Tropical Parula (Parula pitiayumi) from southern Baja California Sur in the 1920s have long been considered to represent the endemic Socorro Island subspecies graysoni. After discovering an adult female Tropical Parula in the same area in May 2006 that did not appear to be graysoni, we examined specimens and the literature, finding that the two 1920s specimens are not graysoni but most consistent with subspecies insularis, occurring primarily on Nayarit’s Tres Marías Islands. The pattern of yellow on the throat, distinct white wing bars, and distinct white tail spots preclude graysoni; the relatively small white tail spots and longer tarsi and tails suggest insularis rather than pulchra of mainland western Mexico.