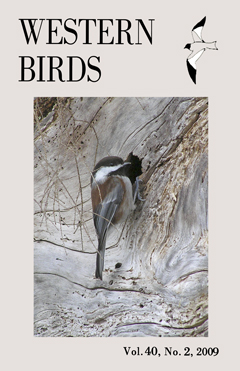 Back cover “Featured Photos” by © Michael A. Schroeder of Bridgeport, Washington: (top) Dusky Grouse (Dendragapus obscurus), male near Turner Valley, Alberta, 14 May 2005. This male has red apteria on the neck, apparently typical of all Dusky Grouse; (bottom) Sooty Grouse (Dendragapus fuliginosus), male south of Terrace, British Columbia, 15 May 2008. Red apteria appear to be the rule in Sooty Grouse from Terrace north through southeastern Alaska, rather than yellow as they are farther south.