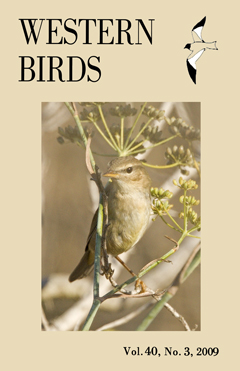 ABSTRACT: We studied a nesting colony of the Least Tern in the saltworks at Guerrero Negro, Baja California Sur, between 31 May and 23 July 2005. We marked the nests as they appeared and counted nests, eggs, and chicks daily. In a comparison of two periods of laying (31 May–13 June and 17 June–19 July) average clutch size of 15 nests (2.06 and 2.00 eggs/nest, respectively) did not differ, suggesting that in the year of our study food was not a limiting resource. We observed 36 chicks, 31 from the first period and five from the second. Incubation in the second period was interrupted by natural predation of nine nests (eight by coyotes and one by ravens). The hatching and fledging success of eggs laid during the first period were 100%, higher than for those laid in the second period (16% and 26%, respectively); the low values of the second period are attributable to a longer time during which the colony was exposed to predation. Though in an artificial habitat, the colony was not affected by human disturbance and enjoyed a high success rate overall. The problem of coyote depredation could be prevented with a fence, increasing the terns’ success further.