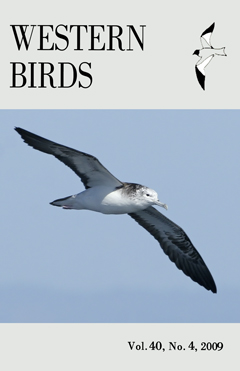 ABSTRACT: Populations of the Vaux’s Swift (Chaetura vauxi), a species of conservation concern, are declining in the Pacific Northwest. We compared the number of swifts nesting in boxes 2007–2008 to those nesting in the same boxes 1999–2002 to determine if numbers had changed. There were 51 nest attempts in the earlier 4-year period but only two to five nest attempts in the later 2-year period, an average decline of 72% in nest-box use. The cause of the decline is unknown. Northern Flying Squirrels (Glaucomys sabrina), Bushy-tailed Woodrats (Neotoma cinerea), and Red Squirrels (Tamiasciurus hudsonicus) usurped some of the nest boxes. Seven of seven swifts tested negative for the antibodies of West Nile virus. Conservation measures that protect existing nest and roost sites and create additional nesting sites (nest boxes and chimneys) would help ensure that habitat is not limiting Vaux’s Swift populations.