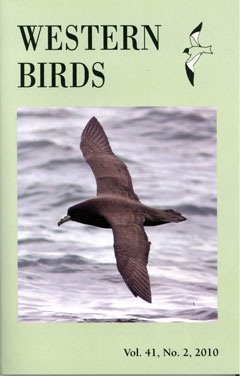 Front cover photo by © John Sterling of Woodland, California: White-chinned Petrel (Procellaria aequinoctialis), off Half Moon Bay, San Mateo County, California, 18 October 2009, evidently constituting the first record of this species for California and the North Pacific Ocean; as this issue goes to press still under consideration by the California Bird Records Committee.