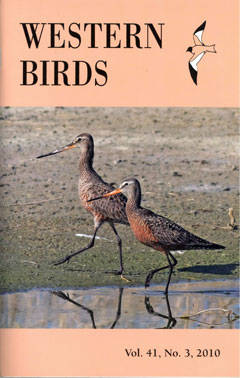 ABSTRACT: A small alcid of uncertain identity was salvaged from a brine pool associated with a potash mine in Eddy County, New Mexico, on 12 July 2009. The carcass was brought to the Museum of Southwestern Biology, prepared as a specimen, and tentatively identified as a Long-billed Murrelet (Brachyramphus perdix), but identification based on measurements and plumage characteristics was not conclusive. DNA sequence from the mitochondrial gene cytochrome-b confirmed the specific identity but revealed a previously unrecognized mitochondrial variant of the Long-billed Murrelet. This specimen provides the first documentation of the Long-billed Murrelet in New Mexico, a record that was anticipated from the species’ established pattern of vagrancy across North America. This vagrant’s novel mitochondrial DNA haplotype reveals previously undescribed population genetic structure within the Long-billed Murrelet.