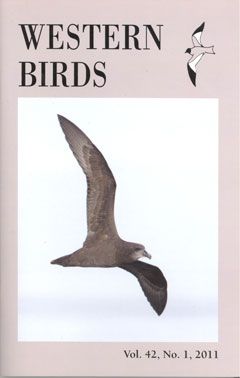 Elevation Ranges of Birds on the Sierra Nevada’s West Slope

ABSTRACT: Published estimates of elevation ranges of Sierra Nevada birds are based primarily on anecdotal observations and professional opinion rather than systematic surveys. Continuing climate change is likely to alter the elevation ranges of Sierra bird species, and is perhaps already doing so, but published data are inadequate for describing elevation ranges rigorously. We present elevation ranges of 75 common Sierra Nevada birds based on data from Sequoia and Kings Canyon national parks in the southern Sierra Nevada and Yosemite National Park in the central Sierra Nevada. The mean elevation of a species was significantly higher at Sequoia/Kings Canyon than at Yosemite, by an average of 103 m. When we excluded species restricted to low-elevation habitats that are better represented at Sequoia/Kings Canyon than at Yosemite, and species that disperse upslope and we detected well above their likely breeding ranges, the mean difference between the two areas in the mean elevation of the remaining 59 species was even greater, 219 m. These descriptions of elevation ranges will facilitate future assessments of range shifts, and, more immediately, will provide managers of more intensively managed lands in the Sierra Nevada outside the parks with reference information from the relatively pristine parks.