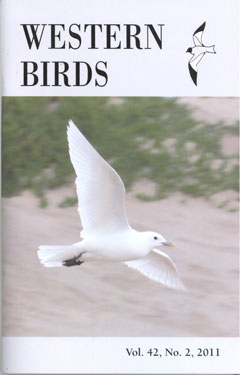 ABSTRACT: The wintering raptors of California’s Central Valley are abundant and diverse. Despite this, little information exists on the habitats used by these birds in winter. We recorded diurnal raptors along 19 roadside survey routes throughout the Central Valley for three consecutive winters between 2007 and 2010. We obtained data sufficient to determine significant positive and negative habitat associations for the White-tailed Kite (Elanus leucurus), Bald Eagle (Haliaeetus leucocephalus), Northern Harrier (Circus cyaneus), Red-tailed Hawk (Buteo jamaicensis), Ferruginous Hawk (Buteo regalis), Rough-legged Hawk (Buteo lagopus), American Kestrel (Falco sparverius), and Prairie Falcon (Falco mexicanus). The Prairie Falcon and Ferruginous and Rough-legged hawks showed expected strong positive associations with grasslands. The Bald Eagle and Northern Harrier were positively associated not only with wetlands but also with rice. The strongest positive association for the White-tailed Kite was with wetlands. The Red-tailed Hawk was positively associated with a variety of habitat types but most strongly with wetlands and rice. The American Kestrel, Northern Harrier, and White-tailed Kite were positively associated with alfalfa. Nearly all species were negatively associated with urbanized landscapes, orchards, and other intensive forms of agriculture. The White-tailed Kite, Northern Harrier, Red-tailed Hawk, Ferruginous Hawk, and American Kestrel showed significant negative associations with oak savanna. Given the rapid conversion of the Central Valley to urban and intensive agricultural uses over the past few decades, these results have important implications for conservation of these wintering raptors in this region.