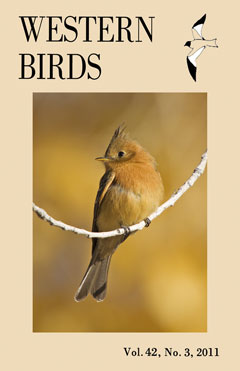 The 35th Report of the California Bird Records Committee: 2009 Records

ABSTRACT: Since its 34th report (Pike and Compton 2010), the California Bird Records Committee (CBRC) has accepted records of 176 individuals of 58 species, 2 species pairs, and 1 hybrid, most of which were of birds observed in 2009. Two species, the White-chinned Petrel (Procellaria aequinoctialis) and the recently split Winter Wren (Troglodytes hiemalis), are added to the California state list, bringing the total to 643 accepted species. We introduce a new tabular format to present CBRC records, similar to that found at the CBRC’s webpage Update to Rare Birds of California (www.californiabirds.org/cbrc_book/update.pdf). In 2011, the CBRC added two species to its review list, the Fulvous Whistling-Duck (Dendrocygna bicolor) and Cape May Warbler (Dendroica tigrina).