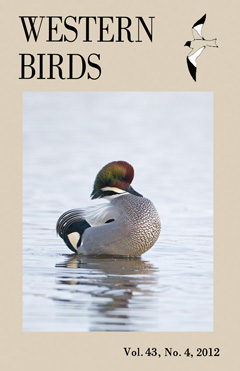 ABSTRACT: Differential migration of the sexes is known in over 60 bird species and may be the predominant pattern in migratory birds. Identifying the causes of differential migration has been difficult, in part because sex-specific migratory patterns have yet to be described for a majority of species. We used the Internet specimen-data portal Ornis to compile sex-specific data on the seasonal distribution of the Short-eared Owl (Asio flammeus), a species that cannot be reliably sexed by external characteristics. We found 1188 specimen records from North America with data on sex, locality, and date of collection. Although the winter distributions of males and females overlapped almost entirely, the mean latitude of females was significantly lower than that of males for the months of November to March. The magnitude of the difference averaged 3.1° between December and February but increased to a peak of 6.0° in March, reflecting earlier onset of spring migration in males. The pattern of differential migration in the Short-eared Owl is compatible with the widely accepted hypothesis that males winter closer to breeding areas because they gain a reproductive advantage from early arrival and establishment of breeding territories (arrival-time hypothesis). Female specimens predominate during late fall and winter and male specimens predominate during the nesting season, suggesting differential seasonal mortality by sex. The skewed sex ratio suggests that differential migration may be caused in part by intrinsic sex differences in foraging efficiency, cold tolerance, or dominance. Comparisons with other raptors reveal that patterns of differential migration are highly species-specific. We conclude, conservatively, that the longer distance female Short-eared Owls migrate is the result of each sex optimizing its migration strategy in light of the higher likelihood of fall and winter mortality of females and the reproductive benefits to males of early arrival on breeding territories.