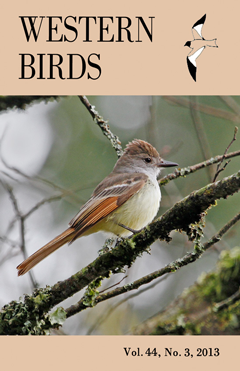 Seabirds New to the Eastern Chukchi and Beaufort Seas, Alaska: Response to a Changing Climate?

ABSTRACT: Seabirds at high latitudes may respond to climate change in a variety of ways, including range contractions or expansions and/or seasonal or annual shifts in distribution. Since 2006, three species of seabirds have been reported in the eastern Chukchi Sea for the first time: the Short-tailed Albatross (Phoebastria albatrus), Northern Gannet (Morus bassanus), and Rhinoceros Auklet (Cerorhinca monocerata). Sometime prior to 2006, the Ancient Murrelet (Synthliboramphus antiquus) expanded its usual maritime range north into the eastern Chukchi and now has reached the Beaufort Sea. The gannet appears to have entered the Pacific via the Northwest Passage, whereas the other three species have moved north from the Pacific. Whales, other seabirds, and diatoms have been recorded moving between the Atlantic and Pacific via the Northwest Passage in the past 15 years as sea ice has retreated and the passage has opened. Because of broad-scale changes to the Chukchi ecosystem and because of increased sampling of the region, we anticipate that additional seabirds will be recorded in the Chukchi and Beaufort seas from the North Pacific and possibly the North Atlantic.

Download—Seabirds New to the Eastern Chukchi and Beaufort Seas, Alaska: Response to a Changing Climate?