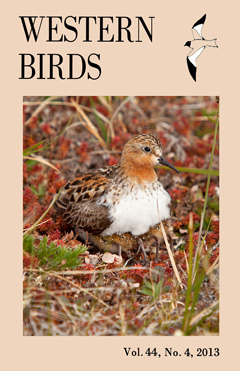 ABSTRACT: The Mount Pinos Sooty Grouse (Dendragapus fuliginosus howardi) is endemic to south-central California and a species of special concern to the California Department of Fish and Wildlife. Historically, it ranged from Kings Canyon in the southern Sierra Nevada of Fresno County (36° 45´ N) south and west to the Mt. Pinos region of Kern and Ventura counties (34° 46.5´ N). On the sky islands of Kern and Ventura counties it has not been sighted since 1993. Between 2002 and 2009, I surveyed in all known or potential historic habitat on these sky islands in spring, when males sing. I found no evidence of grouse in that region but did confirm the southernmost breeding sites in the main southern Sierra Nevada. Extirpation from the sky islands appears to have coincided with a proliferation of livestock grazing, timber harvesting, rural development, and fire suppression. Perhaps these activities altered the spatial pattern of seasonal habitats, increasing the grouse’s exposure to predation, or perhaps the removal of large trees, which the grouse uses as territorial songposts, rendered the sky islands unsuitable.