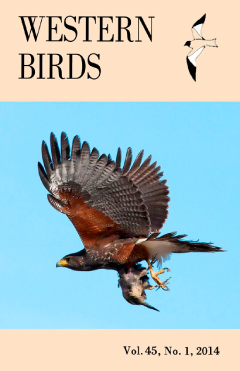 ABSTRACT: Climate change is predicted to affect the ranges of montane birds differently, depending on their ecological adaptations to regional conditions. Detailed regional data on species’ distributions from a systematic survey are crucial for tracking these range shifts and for guiding conservation decisions. We systematically completed 3578 point counts along a 2736-km mega-transect by following the Pacific Crest Trail (PCT) from 2 April to 8 September 2006. On this basis, we describe the elevation ranges of 74 common bird species and their habitats along the PCT by five segments: southern California, southern and northern Sierra Nevada, southern Cascade Range, and Klamath Mountains. We also identify potential sampling bias caused from seasonal variation in the detectability of birds by region. This assessment of bird distributions over a wide range can permit future efforts to gauge the responses of large numbers of common birds to land use and climate change.