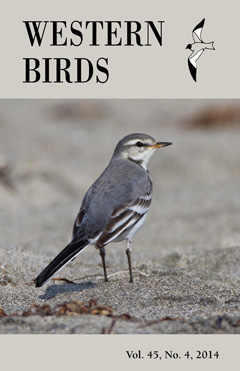 ABSTRACT: The Purple Finch (Haemorhous purpureus) is most often recognized as comprising two distinct subspecies: purpureus, breeding and wintering through most of Canada and the eastern United States, and californicus, reported to be largely resident along the Pacific coast, from British Columbia to southern California. Although the migratory purpureus is the subspecies expected as a vagrant in Alaska and the interior West, the identity of the subspecies occurring in these regions has been poorly documented. Here we document the first records of purpureus for California and assess the subspecies of the Purple Finch from photographs and specimens throughout western North America. Nominate purpureus occurs regularly in the western Great Plains states and very sparsely farther west. H. p. californicus may be more prone to vagrancy than previously suspected, as we document the first records for Alaska, Colorado, and New Mexico.