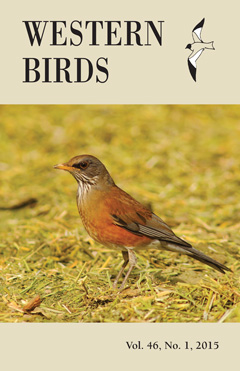 Breeding of the Ashy Storm-Petrel in Central Mendocino County, California

ABSTRACT: In August 2012, we confirmed breeding by an estimated 50 pairs of Ashy Storm-Petrels (Oceanodroma homochroa) at four nearshore rocks (Franklin Smith Rock, Wharf Rocks, Casket Rock, and Stillwell Point Rock) along the central coast of Mendocino County, California. Nesting in this region at the northern end of the species’ range was first discovered in 1926, when four eggs were collected by Franklin J. Smith on nearshore rocks and preserved in private collections but not published. Ashy Storm-Petrel colonies were not detected north of Marin County during major surveys of seabird colonies in 1969, 1979–1980, or 1989, but specific efforts to detect storm-petrels were made at only a few rocks. In 2012, we did not find Ashy Storm-Petrels breeding north of Stillwell Point Rock (39.3° N), which appears to be the current northern limit of the species’ breeding range.

Download—Breeding of the Ashy Storm-Petrel in Central Mendocino County, California