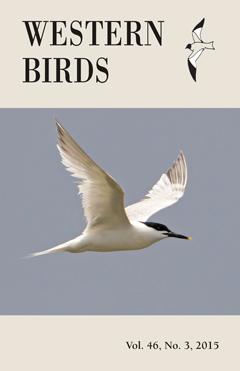 ABSTRACT: A lack of information on the full life cycle of long-distance migrants, including nonbreeding periods, may hinder the recovery of threatened populations. In 2010, on the middle Rio Grande, Sechrist et al. (2012) recaptured a Yellow-billed Cuckoo (Coccyzus americanus) fitted with a light-level geolocator, revealing for the first time wintering grounds and migration routes of an individual of this species. To further this knowledge, in 2011 we placed light-level geolocators on eight Western Yellow-billed Cuckoos at breeding sites on the lower Colorado River in Arizona and California. We recaptured one female in July 2012 at her previous capture site and analyzed the stored light data. During fall migration the bird flew ~9500–9900 km, passing through the Caribbean region. It wintered from mid-November to late April in the Gran Chaco of central South America, around the junction of Paraguay, Bolivia, and Argentina. The more direct spring route back to the breeding grounds passed through Peru and Central America. Following recapture, we discovered the bird was nesting while wearing the geolocator, and she later fledged young from two nests. Before and after migration, the bird appeared to pause in southern Arizona or Sonora, paralleling the first tracked Western Yellow-billed Cuckoo, suggesting this monsoonal region may be important to the western population during these stages of the life cycle. The bird’s migration timing and loop route, though reversed in direction, were also strikingly similar to those of the first bird tracked, and their overlapping wintering grounds suggests the possibility of a distinct winter range for the western population. Given the continuing expansion of agriculture into natural areas throughout this large region of South America, conservation of these forested areas is essential.