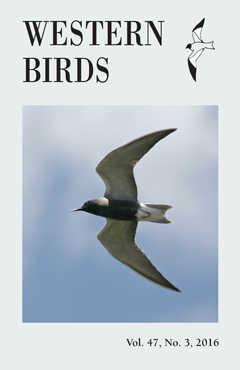 Numbers of Terns Breeding Inland in California: Trends or Tribulations?

ABSTRACT: Broad-scale surveys or monitoring of the distribution and abundance of waterbirds in the interior of the American West have been limited despite great losses of waterbirds’ historic foraging and nesting habitats. Yet such work is crucial for assessing conservation status, population trends, habitat health, and the effects of management and environmental change on waterbirds. As part of the Western Colonial Waterbird Survey—an inventory of 19 species across 11 western states—we focused on three species of terns with conservation concern and assessed their distribution and numbers throughout their inland breeding ranges in California from 2009 to 2012. We compare these numbers to data from comparable surveys from 1997 to 1999. Climatic conditions strongly influenced the distribution and abundance of all three species, especially precipitation, which was below the long-term mean in relevant regions of the state for 3–4 years preceding the second round of surveys, greatly reducing foraging and nesting habitat. For the Black Tern (Chlidonias niger) and Forster’s Tern (Sterna forsteri), respectively, statewide inland totals in 2009–2012 were about 49% and 26% of those in 1997–1999. Similarly, the numbers of breeding sites for those species were greatly reduced, particularly in northeastern California and the San Joaquin Valley. Patterns were less clear and varied regionally for the Caspian Tern (Hydroprogne caspia), as totals were greatly affected in all years by generally high, but variable, numbers at the Salton Sea. In northeastern California, however, drought reduced numbers of breeding Caspian Terns at least 10-fold from 1999 to 2009, and that region’s contribution to the statewide inland total dropped from 68% in 1999 to 1% in 2009. It is unclear if these patterns for the three tern species will prove to be part of a longer-term declining trend or just a tribulation the terns faced from short-term fluctuations in precipitation. The latter may be likely given California’s pattern of drought recurring about every 15 years through the 20th century. However, the relatively benign climatic patterns during this century may not persist in the future, and any drought effects come on top of the loss of >90% of California’s historic wetlands and a severe over-allocation of the state’s water resources. Designs for long-term monitoring of inland tern populations should consider the state’s highly variable annual precipitation and the possibility of some species shifting among coastal and inland breeding sites. Management in the face of such variability and the uncertainty of future climate may be difficult, but securing adequate water in both dry and wet periods will be important as competition for supplies increases.

Download—Numbers of Terns Breeding Inland in California: Trends or Tribulations?