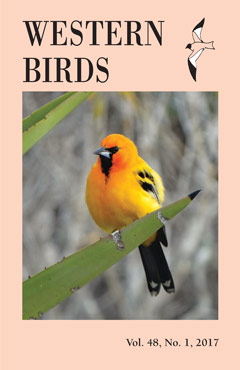 Contrasting Habitat Associations of Sagebrush-Steppe Songbirds in the Intermountain West

ABSTRACT: Sagebrush (Artemisia spp.) steppe is one of North America’s most imperiled ecosystems, as the result of many factors including grazing, development, fire, and invasion of exotic plants. Threats to sagebrush steppe are expected to increase because of climate change and further human development. Many songbirds use sagebrush steppe opportunistically, but a few obligate species are dependent on it. To quantify the habitat associations of three sagebrush obligates, the Sage Thrasher (Oreoscoptes montanus), Sagebrush Sparrow (Artemisiospiza nevadensis), and Brewer’s Sparrow (Spizella breweri), and nine other songbird species that use this habitat, we surveyed across a broad region of Idaho. At each of 104 sites, we selected three plots, one each in relatively poor, moderate, and good condition, defined qualitatively by the cover of native shrubs. We quantified bird abundance by point counts, described the habitat at these points by a line-intercept method, and at each plot calculated the fraction of a circle (radius 1 km) covered in shrubs or grassland. We compared two-scale occupancy models based on these data by the information-theoretic approach. According to the models, our qualitative assessment of habitat condition within a site distinguished birds’ use of relatively good habitat from their use of poor habitats only, not from those in moderate condition. Thus the sagebrush-obligate species may tolerate some local habitat degradation, at least up to some unidentified threshold. Occurrence of all three sagebrush obligates correlated well with one or more characteristics of sagebrush such as its cover, height, or heterogeneity in height. They differed in the Sage Thrasher being most sensitive to sagebrush cover, the Sagebrush Sparrow being found more often at lower elevations, and the Brewer’s Sparrow being less sensitive to ground cover. The nine other species evaluated were less or negatively associated with attributes of sagebrush. On the basis of these results, we suggest that the three sagebrush obligates are best conserved by promoting shrublands over a broad range of elevations, containing both sagebrush and other shrubs in patches of mixed height, and minimizing invasive annual grasses.