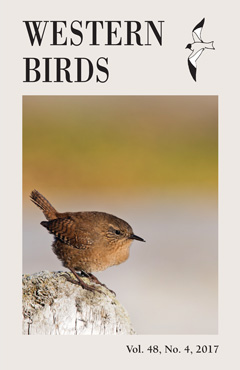 Front cover photo by © Lucas H. DeCicco/USFWS of Anchorage, Alaska: Pacific Wren (Troglodytes pacificus helleri), Middleton Island, Alaska, 23 October 2016. Ubiquitous on Middleton from coastal windrows of driftwood to dilapidated military buildings, the Pacific Wren is emblematic of this island isolated in the Gulf of Alaska, and is its only passerine resident year round. Subspecies helleri is restricted, so far as is known, to Middleton Island and the Kodiak archipelago to the west.