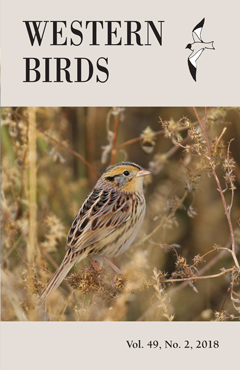 Attempts to Establish Colonies of the Purple Martin in Nest Boxes in California: First Success and Evaluation of Failures
Daniel A. Airola, Stan Kostka, and Corinna Elwood

Attempted Kleptoparasitism of a White-tailed Kite by a Peregrine Falcon
Faith Rigolosi and Floyd E. Hayes

Front cover photo by © Greg Scyphers of Sparks, Nevada: LeConte’s Sparrow (Ammodramus leconteii) at Dyer, Esmeralda County, Nevada, 24–27 October 2015. It represents the fifth Nevada record of this species that is characteristic of the Central Flyway of North America and reaches the western states only as a vagrant, primarily in late fall.

Back cover “Featured Photo” by © Deborah J. House of Bishop, California: melanistic Brown-crested Flycatcher (Myiarchus tyrannulus) at China Ranch, Inyo County, California, 25 May 2008. Though this represents the first record of melanism in the genus Myiarchus, the existence of several sooty or black species in other genera of flycatchers suggests that melanism like this has played a role in the evolution of the family Tyrannidae.