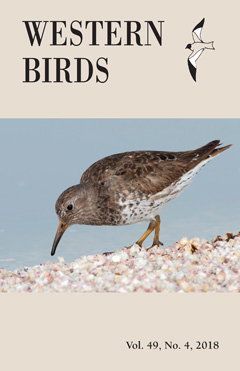 ABSTRACT: From its last report through 2016 the California Bird Records Committee reached decisions on 174 records involving 167 individuals of 68 species and two species groups, endorsing 139 records of 152 individuals. The first accepted state records of the Purple Sandpiper (Calidris maritima), Jouanin’s Petrel (Bulweria fallax), and Buff-breasted Flycatcher (Empidonax fulvifrons) are outlined in this report, as is the acceptance of the Oriental Greenfinch (Chloris sinica) to the main list based on reconsideration of a record that was previously not accepted. These additions bring California’s total list of accepted species to 667, of which 11 represent established introductions. Other notable records detailed in this report include the state’s second Swallow-tailed Kite (Elanoides forficatus), third Great Frigatebird (Fregata minor), and fourth Common Pochard (Aythya ferina).