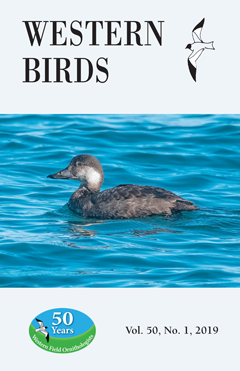 Front cover photo by © Fred Petersen of Reno, Nevada: Black Scoter (Melanitta americana), at Warrior Point, Pyramid Lake, Washoe County, Nevada, 11–12 December 2016, representing the 13th record for Nevada endorsed by the Nevada Bird Records Committee. Nevada has had at least one record of the Black Scoter in 6 of the last 10 years.

Back cover “Featured Photo” by © Blaine H. Carnes of Coppell, Texas: White-eyed Vireo (Vireo griseus) at Freshwater Creek Forest Reserve, Orange Walk district, Belize, 20–22 February 2018. Note the active molt in the secondaries and tertials, unexpected at this time in a species with only a single prebasic molt per year. Evidently, the molt during the preceding fall had been suspended, then resumed while the bird was in its winter range.