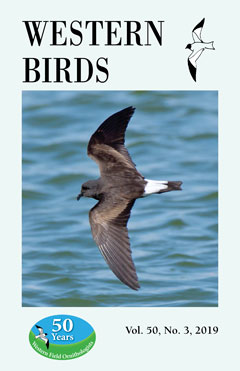 Winter Distributions and Habitat Associations of Raptors across Nevada

ABSTRACT: Raptors wintering in Nevada comprise both local breeders and migrants from long distances, making winter surveys valuable for evaluating trends within multiple regional populations. We evaluated data on Nevada's wintering raptors recorded over six years from two programs—the statewide road-based surveys coordinated by the Nevada Department of Wildlife and the boat-based surveys of Lake Mead and Lake Mohave led by the National Park Service. Observations were sufficient for us to develop well-performing predictive models of the distribution and habitat use of seven species plus all species of Accipiter pooled. The distribution of the Bald Eagle (Haliaeetus leucocephalus) was stable over the six years, while the density of the Golden Eagle (Aquila chrysaetos) increased in 2018. Numbers of some of the other species may vary cyclically, possibly over a period three to six years, as expected for species that feed on small mammals. Patterns of the American Kestrel (Falco sparverius), Prairie Falcon (F. mexicanus), and Accipiter hawks were similar, possibly the result of these species focusing on the same prey in winter. Among the species whose models performed well, a positive correlation with pasture and fallow cropland was the most frequent habitat association, ranking high for all. Accipiter hawks and the American Kestrel were associated positively with a moderate degree of human modifications of the habitat other than agriculture, but the Northern Harrier (Circus hudsonius), Rough-legged Hawk (Buteo lagopus), Ferruginous Hawk (B. regalis), and Prairie Falcon showed a strong negative association with all levels of such development.