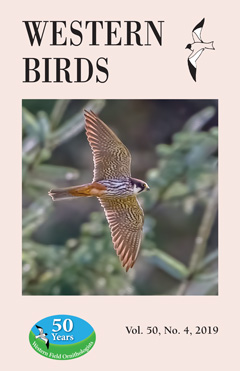 ABSTRACT: Emerging bioacoustic technology allows researchers to passively record animal vocalizations to study population dynamics at relatively broad spatial scales. Spatiotemporal patterns in vocalization behavior free from direct human influence, which occurs during traditional vocal-lure surveys, may also yield novel behavioral insights. We used passively recorded audio data to examine such patterns in the California Spotted Owl (Strix occidentalis occidentalis) across the northern Sierra Nevada. We assessed temporal patterns in the initiation of bouts of four-note calls and the number of such calls, and we used generalized linear mixed models to test whether environmental factors influenced bout-initiation time, bout duration, and the number of calls per unit time. We found that (1) Spotted Owls were most vocally active within three hours of sunset, (2) bouts of calling were longer with fewer calls per unit time in open and young forest, (3) those bouts were concentrated in the middle of the night, and (4) the frequency of occurrence and duration of bouts of territorial vocal activity was reduced in montane riparian forest. These patterns suggest that Spotted Owls may engage in territorial defense in marginal habitat (open and young forest) and minimize their vocal activity in key foraging habitat (montane riparian forest). This application of acoustic monitoring data to behavioral ecology illustrates the broad applicability of the underlying audio data and its potential to yield novel ecological insights.