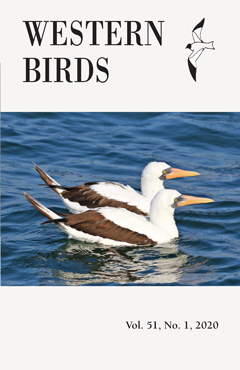 Abstract: Belding’s Yellowthroat (Geothlypis beldingi) is an endangered species endemic to the southern half of the Baja California Peninsula. There are no current estimates of the species’ population, crucial to scientifically based management for its conservation. Therefore, we assessed the species’ population at one of its major sites, the oasis of San Ignacio. During the reproductive season, the density of birds reached around 17 individuals per hectare, representing an estimated total population of about 250 birds. Previous estimates of the abundance of Belding’s Yellowthroat are inconsistent, emphasizing the need for a re-evaluation with more robust methods. In addition, we recorded a significant decrease in the number of males of the species immediately after the reproductive season, which suggests that these birds may disperse immediately after the breeding season, possibly to avoid competition with their conspecifics. If so, this has important implications for this bird’s spatial population structure.