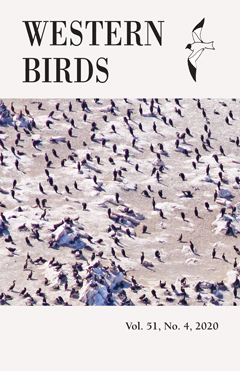 Comparison of the Songs of Cassin’s and Plumbeous Vireos

ABSTRACT: We compared the songs of Cassin’s (Vireo cassinii) and Plumbeous (V. plumbeus) Vireos to determine if there are characteristics that could allow one to confidently distinguish between these species by song. Using recordings made in the breeding season and within the undisputed breeding ranges of each species, away from the zone of contact, we compared five characteristics of a song: phrase length, rate of phrase delivery, proportion of frequency-modulated (buzzy) phrases, proportion of doubled phrases, and midpoint frequency between the highest and lowest frequencies of a phrase. Among these, the only character in which the species differed significantly was the average midpoint frequency of song phrases. Despite overlap between the species in the distribution of average midpoint frequency, a criterion of 3215 Hz allowed ~84% of the vireo songs in our sample to be identified correctly. We also tabulated expected proportions of true and false positive species identifications based on the full range of average midpoint frequencies likely to be encountered, finding that values >3410 Hz have a >95% probability of representing Cassin’s Vireo, and values <3050 have a >95% probability of representing the Plumbeous Vireo. Various field guides show conflicting breeding ranges for these species, and there are many field reports of both vireos outside their known breeding ranges in the breeding season. Given that visual identification of these birds in the field can be difficult when individuals are in faded spring/summer plumage, song may allow us to better define the actual limits of these species’ breeding ranges.