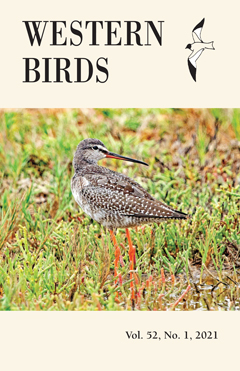 The Status of Loons in Idaho

ABSTRACT: This report summarizes and updates the population status and distribution of loons in Idaho. Formerly, the Common Loon bred in northern, central, and southeastern Idaho, probably widely. With only sporadic unsustained nesting in the last half century it has been essentially extirpated as a breeding species, but flocks of up to 200 migrating birds occur in spring and autumn. In spring, concentrations are most frequent in southeastern and south-central Idaho, but in autumn they are widespread. Common Loon migration peaks from mid-April to early May and from mid-October to mid-November. The species winters in numbers of up to 20 on large lakes in northern and southwestern Idaho. The Pacific Loon was not conclusively recorded in Idaho before 1974, but since the mid-1980s a few to dozens have occurred annually in autumn throughout the state, with concentrations of up to 30. Its autumn migration peaks from mid-October to late November. In most years a few now winter, primarily in northern Idaho. There have been a dozen spring and three summer records. Early in the 20th century the Red-throated Loon was recorded rarely in migration but since the 1980s it has been recorded most years, most frequently in autumn. First noted in 1979, the Yellow-billed Loon remains rare. In spring, summer, and winter it is recorded principally from large lakes in northern Idaho, but autumn records are widespread.