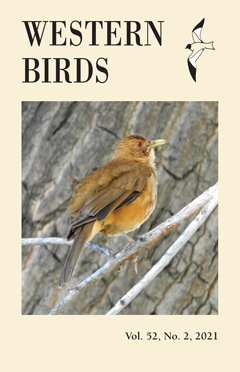 ABSTRACT: Most birds living in the temperate zones breed in spring or summer. In a variety of species, however, copulatory behavior has been observed out of season in autumn. Such activity has been proposed to represent late breeding attempts, help to maintain pair bonds during the nonbreeding season, or aid in the formation of future breeding pairs. We observed three attempted copulations (one with cloacal contact) in late November between three male and two female California Quail (Callipepla californica), a species with a flexible mating system. Given that one of the females, and at least two of the observed males, were under a year of age and, therefore, almost certainly sexually immature, we suggest that these copulation attempts could contribute to pair formation. The two males and two females, whose identities were known, spent more time associating with the individual with which they engaged in copulatory activity than with any other covey member of the opposite sex, also implying a social function of this behavior. Nevertheless, we cannot rule out the unlikely possibilities that the observed activity represented astonishingly early breeding attempts, acted as expressions of intersexual social dominance, or functioned as practice for the upcoming breeding season. Possibly, the behavior served no immediate adaptive purpose. Nevertheless, autumn copulatory activity in the California Quail may be more common than known, and we present these observations as a call for further monitoring to clarify the potential function(s) of this behavior.