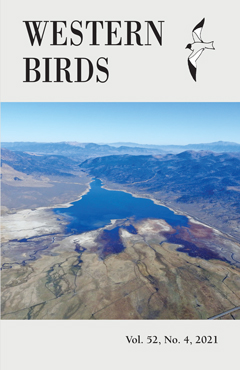 Using Song Dialects to Assess the Migration Strategy of the Golden-crowned Sparrow
Edward R. Pandolfino and Lily A. Douglas

Front cover photo by © Deborah J. House of Bishop, California: Bridgeport Reservoir, Mono County, California, 17 October 2018. Seventeen years of systematic surveys demonstrate the importance of Bridgeport Reservoir as a fall stopover for migrating waterfowl, especially dabbling ducks. Yet the trend in their numbers over this period has been a decline, paralleling the intensification of drought threatening the scattered wetlands of the Great Basin.

Back cover photos by © Ryan S. Terrill of Los Angeles, California: Western Tanager (Piranga ludoviciana) and Yellow-rumped Warbler (Setophaga coronata) as they pass in migration over Bear Divide, San Gabriel Mountains, Los Angeles County, California, on 5 May and 4 April 2021, respectively. Bear Divide is newly revealed as a point of concentration and unparalleled visibility of land birds as they head north in spring migration along the Pacific Flyway.