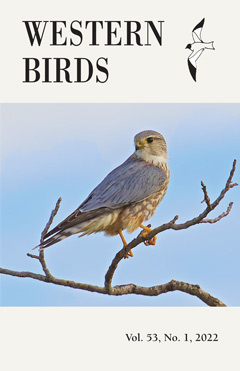 Breeding Swainson’s Hawks in the Central Coast Range of California

ABSTRACT: During the 20th century the Swainson’s Hawk (Buteo swainsoni) was an infrequent migrant through the central Coast Range of California with no breeding documented. Since 2005, however, several breeding pairs have established nest sites in the region. We studied Swainson’s Hawks during the breeding seasons of 2019 and 2020 in a portion of the central Coast Range to estimate their abundance and distribution there. We observed individual hawks systematically and monitored their nesting activity and breeding outcomes in suitable habitat in Alameda, Santa Clara, and San Benito counties within the Coast Range and sought to characterize the habitat of this small outlying population. From 2019 to 2020 the numbers of nesting pairs increased from 3 to 5, of young fledged from 1 to 6, and of individual adults from 15 to 22. Swainson’s Hawks were more closely associated with farmland than with grassland, and nests were located in areas that were closely associated with both grassland and farmland. The increase of this species in the central Coast Range and its use of agricultural areas is of conservation significance for land managers and wildlife and conservation agencies, given that the California Department of Fish and Wildlife has designated it as threatened.