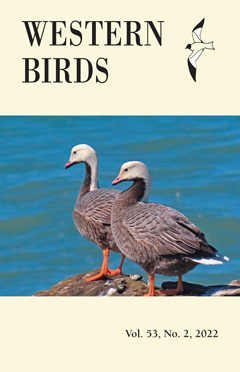 ABSTRACT: A large sample of nocturnal flight calls of warblers and sparrows recorded on the outskirts of Nogales, Arizona, from mid-August through October 2015 included an unknown call-type that has not been documented in extensive monitoring of nocturnal flight calls across the eastern United States. Though variable, it averages 213 milliseconds in duration and consists of two simultaneous sounds differing in pitch and whose frequency is often modulated at a rate about 59 hertz. The call-type occurred primarily during September with a peak in the middle of the month. This corresponds with the peak in migration of the Green-tailed Towhee (Pipilo chlorurus) near Nogales. That species affords the closest match to a diurnal contact call of a migratory species common in the area whose nocturnal flight call is as yet undescribed.