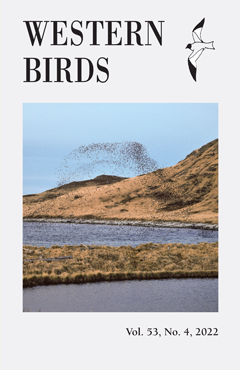 Birds of The Shumagin Islands, Alaska

ABSTRACT: We studied birds in the Shumagin Islands in 18 of the 37 years from 1970 to 2006 and synthesized all available information on birds of this area. A total of 126 forms of 125 species, including hypothetical species, has been recorded in the Shumagins, of which aquatic birds constitute 67% and terrestrial birds 33%. Overall, 52% of all forms breed, probably breed, or formerly bred; of these, aquatic birds represent 57% and terrestrial birds 43%. The avifauna is heavily weighted toward Nearctic (39% of all forms) and Beringian (32%) forms, followed by Holarctic (21%), Palearctic (6%), and Oceanian (2%) forms; breeding taxa are even more heavily weighted toward Beringian (46%) and Nearctic (40%) forms. The Shumagins have few breeding waterfowl, other freshwater birds, and shorebirds and are not on important flyways for any of these groups, despite lying near important spring and fall staging areas on the nearby Alaska Peninsula. The seabird and terrestrial avifaunas are diverse and similar to those in nearby areas, especially the eastern Aleutians. Populations of several seabird species in the Shumagins have declined substantially over the last 40 years. Two terrestrial species, the Pacific Wren (Troglodytes pacificus) and Pine Grosbeak (Pinicola enucleator), have expanded their breeding ranges into this area, and breeding distributions of some terrestrial birds in the outer Shumagins appear to be changing. Changes in range or breeding status have been caused, at least in part, by predation by introduced foxes, overgrazing by introduced cattle degrading already limited habitat, and the introduction of ground squirrels.

Download—Birds of The Shumagin Islands, Alaska