Attendees at the 2021 WFO virtual conference heard reports from two of our research grant recipients. Ayala Berger (University of California, Riverside, PhD student, 2020 recipient) reported on her work on geographic variation in songs and displays of Anna’s Hummingbirds. Ben Sonnenberg (University of Nevada, Reno, PhD student, 2021 recipient) reported on his work on stress and cognition in Mountain Chickadees. Below are reports from Daniel Wait on his study of vocal variation in Spotted Towhees, Wilmer Amaya-Mejia on effects of urbanization on disease occurrence in Dark-eyed Juncos, and Angela Theodosopoulos on avian malaria in two chickadee species. 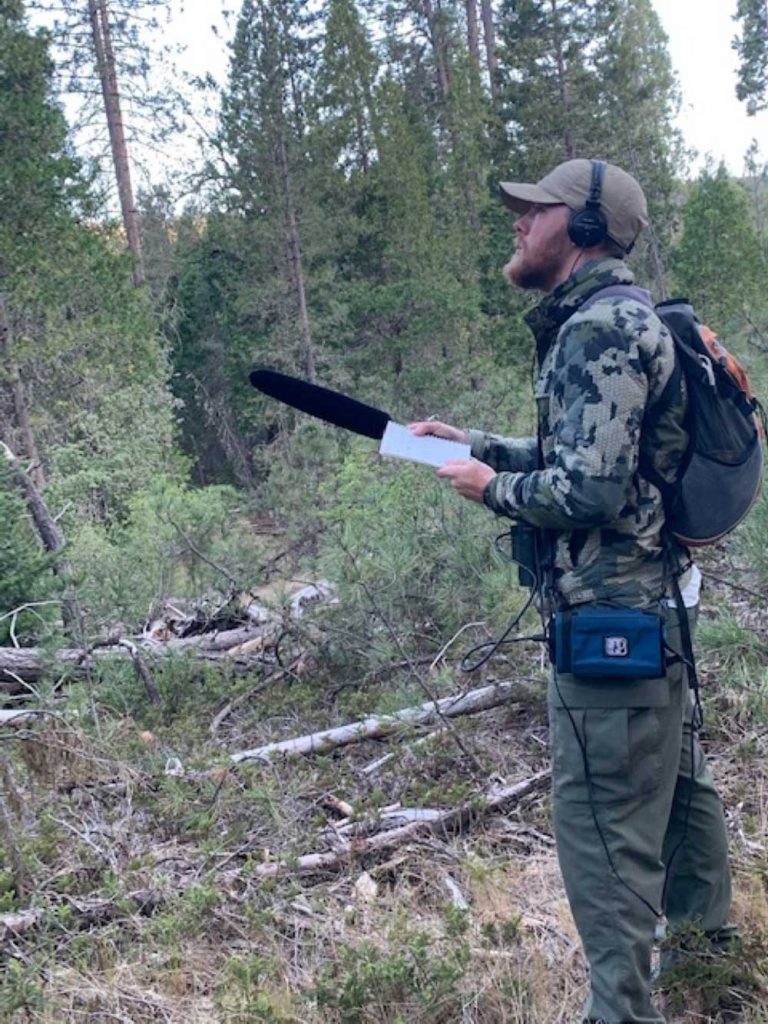 During the summer of 2020, and 2021, I conducted two seasons of field work for the second chapter of my dissertation work with the assistance of the WFO research grant. The purpose was to conduct reciprocal playback experiments on Spotted Towhees (P. maculatus) of distinct dialects to see if birds of different dialects were able to distinguish and discriminate against one another’s calls. This in turn would help support the hypothesis that vocal variation may lead to reproductive isolation and therefore a potential barrier to gene exchange. This work will add insight to lab work I am currently pursuing using specimens from the same populations I tested.

During the previous 2020 field season, I conducted my experiments in four geographically isolated regions of the towhees’ geographic range. I focused on two populations that sang the Pacific dialect and two populations that sang the Interior dialect. My work showed a strong pattern in which birds from the Pacific dialect react more aggressively toward playbacks of conspecific songs and less aggressively toward playbacks of Interior songs. This strong pattern held true with the Interior birds reacting more aggressively to their own playbacks than the Pacific playbacks. The pattern was demonstrated by collecting several measures of behavior, including number of vocal responses to stimulus, number of flights the focal bird initiated during the experiments, and the distance the focal bird was from the speaker throughout the playback experiment. In all cases, there appeared to be significant differences between the focal bird’s response and the dialect I played to it. This was the result I anticipated, so this is a splendid outcome.

For the 2021 field season, I again traveled to two Pacific dialect populations and two Interior dialect populations. The pattern from the previous season held. I also visited a region of vocal contact between the two dialects near Bishop, California. In this region I encountered birds of both dialects and found the results to be more varied. Some birds reacted similarly to the previous populations I had tested, while other birds broke the pattern. Furthermore, I encountered individuals that seemed to sing both dialects as well as just parts of each dialect. Unfortunately, the by the time I was able to make it to Bishop, it was clear that I had missed most of the mating season and it was too hot for much activity. My playback experiments were greatly limited in Bishop, so I cannot say definitively how the birds were reacting to the playback experiments. More work needs to be done, but it does seem as though birds in the vocal contact zone do not follow the trends I had previously witnessed in the geographically isolated populations.

Overall WFO’s grant provided me with funding to visit four separate sites in the western United States. And this worked spurred a second productive season and will spur a third. The grant money was used for gas, food, and lodging. 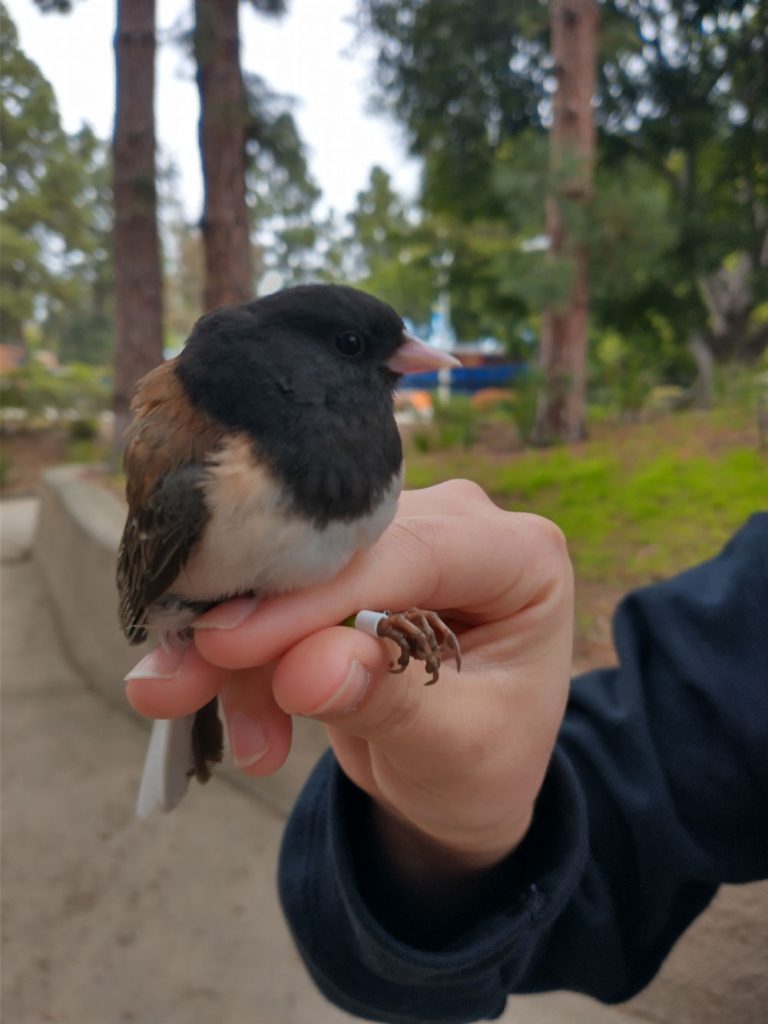 This 2021 field season, although restricted due to COVID-19, was fruitful in providing many samples for the study. We banded 309 Dark-eyed Juncos, 130 located in urban habitats (UCLA, UCSB, various LA parks), and 28 juncos from mountainous habitats (Stunt Ranch, Angeles National Forest, Santa Monica Mountains). The urban sites had 6% infection prevalence, while the mountain sites had 7%. These values were lower than previous studies and were likely driven by smaller sample sizes and recent drought conditions. Morphological characteristics suggest the presence of Parahaemproteus spp. infections in both environments. PCR-based analysis is currently ongoing to verify infection prevalence and lineage identification, given the cryptic speciation of haemosporidian parasites. Following verification, RNA samples will be submitted for sequencing. 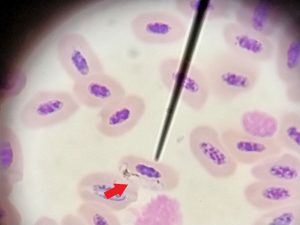 In addition to the described project, the data collected are being incorporated in upcoming publications and projects. These projects are investigating the difference between morphological characteristics of the mountain populations and urban populations. Through the support of Western Field Ornithologists, we are also able to pursue research questions into the genomic variations between these two populations. While we were able to establish a pilot study into this question, the ability to purchase a DNA extraction kit has allowed us to compare samples more thoroughly. Once lab work has been completed, I am hoping to present at the annual WFO conference.

On a more personal note, I would like to pass on my gratitude to Western Field Ornithologists for the trust they placed in me. This year has proven to be especially challenging. Beyond the complications associated with COVID-19, I experienced medical challenges that prevented me from conducting the desired lab work and even caused me to miss the annual conference. Despite these issues, I am confident that the next few months will prove especially fruitful, and I am eager to collect and share all of the exciting findings.

This past research season, my field crew and I spent our time studying breeding Mountain (Poecile gambeli) and Black-capped (P. atricapillus) chickadees in Boulder County. Our work involved monitoring 368 nest boxes (a box that a bird uses to nest and shelter in) that my research group in the Taylor Lab at CU Boulder has worked to establish. This summer we put USGS bands on over 250 chicks! We also collected morphometric data (e.g., body mass and tarsus length) for every chick to determine how healthy they are. Additionally, I sampled chicks and their parents for malaria parasites. Just like humans, birds can exhibit infections with malaria-causing parasites (though they are distant relatives and do not spread to humans through zoonosis). Along with describing the diversity and patterns of malaria parasites that infect chickadees, I’m interested in how these infections can affect chickadee survival and reproductive success. 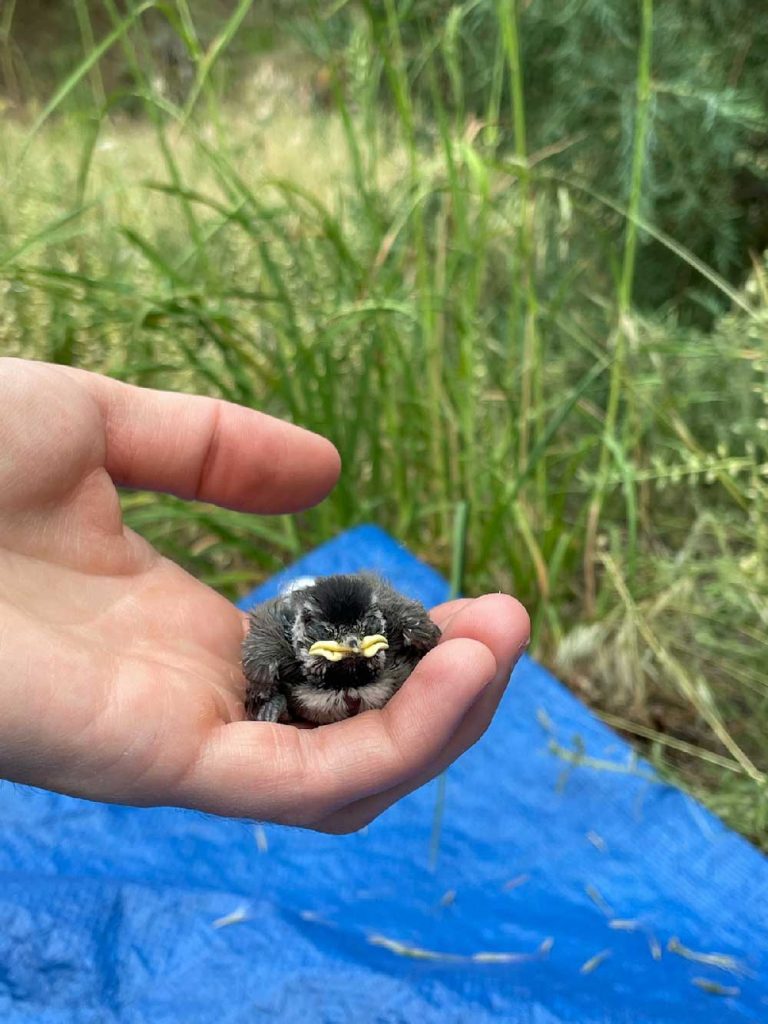 Twelve-day-old Mountain Chickadee chick. Chicks are briefly held while we put on a USGS band and take measurements. Photo: A. Theodosopoulos

This past year I found that Boulder chickadees are experiencing infections with SGS1, a highly invasive strain of the avian malaria parasite, Plasmodium relictum. This strain has not previously been described in Colorado, and using a genetic marker I found that it was most likely introduced from Europe. This past summer my co-authors and I published these findings in the journal Biology Letters, and an Audubon article was recently written about this work. While we don’t currently know how chickadees are responding to these infections, it is certainly a conservation concern. I am now exploring the events that led to SGS1’s introduction to Colorado, and broadly North America, through a collaboration with researchers at Lund University, the Denver Museum of Nature and Science, and the Smithsonian Institution.

Funding provided by Western Field Ornithologists was instrumental for me to conduct field research between May and July 2021. The data that I collected will play an integral role in the completion of my dissertation. Thank you so much to all of the donors who made this work possible. Further, I’m incredibly grateful that I had the opportunity to mentor three amazing undergraduate researchers and train them in field ornithology techniques. This was important to me because I was unable to work with an in-person field crew in 2020. Watching these students grow in their field ornithology skills and research interests was an incredibly rewarding experience for me. I won’t be working with chickadees this next field season, but I will certainly continue my work studying birds and applying field ornithology skills as I help train the next generation of researchers.